A Journey from India to NASA

Every team had a six-minute window to navigate the course, gathering points and trying to complete 14 obstacles. After constructing their own rovers, teams attempt to transverse a nearly three-quarter-mile course with grueling obstacles that simulate the terrain found on Mars, as well as other planets throughout the solar system.

KIET Group of Institution’s four-member team, led by Shatakshi Dwivedi, a mechanical engineering student  competed against 115 teams from all over the world in presenting the best design for 25th Annual Rover Challenge held at the US Space and Rocket Center in Alabama and won the AIAA Neil Armstrong Best Design Award.  Indian-American NASA astronaut and two-time space flight veteran Sunita Williams attended the second day of the event, interacting with teams and participating in the day’s activities.

Dwivedi (22), who is visiting the Space Institute for the first time, said, “It was challenging to be a captain but the team was very supportive. Since it was our first time, it involved risk factors. A lot has been learned from the participating teams and I feel plenty of technology can be brought back to India.” Her team associates Abhimanyu Bhagat, Utkarsh Sharma and Suyash Yadav felt overwhelmed as their project “MOON BUGGY” demonstrated excellence amongst participating competitors, hailing from a record number of countries including Germany, the US, Bolivia, Peru and Egypt.

Story behind the project ‘MOON BUGGY’

Suyash Yadav one of the team said, “In 1971, 3 astronauts launched an Apollo 14, an extraordinary, complex mission to the Moon. While one of them remained in orbit in the capsule, other two astronauts was to explore the Cone Crater to better understand the Moon’s early history. At one point during the trek, an astronaut’s heart rate increased. Both astronauts were stopping to take breaks, perspiring and gulping intakes of oxygen, and the internal temperature of their suits was rising dramatically. The crew had gone from the lunar module Antares for two hours and was running out of time and oxygen. They had difficulty navigating the slopes and fell 30 minutes behind schedule. As a result, they reached a point within 50 feet of the rim of the crater before having to turn back toward Antares. The crew was able to gather 99 pounds (45 kilograms) of lunar material and did achieve the goal of reaching the vicinity of the crater.

During this whole event, they struggled a lot and therefore NASA decided to take a step ahead and started an event ‘THE GREAT MOONBUGGY RACE’ that is now known as ‘HUMAN EXPLORATION ROVER CHALLENGE’ which challenges students to create a vehicle designed to traverse the simulated surface of another world. It also motivates the students to become engineers who can design NASA’s next-generation space systems.

It was challenging to be a captain but the team was very supportive. Since it was our first time, it involved risk factors

There was full support from the College management, faculty and other members. The workshop was equipped with all the necessary machineries. The college supported the team by both financial as well as physical requirements at each stage from the initial to the final event date. The only problem we had was of lesser number of members in team. The team consisted of only four official members.

Tuhin Srivastava, Mentor of the Team

Being a mentor of SAE KIET Collegiate Club my primary job is to direct the energy of the team members to achieve the goal of the team. The students are very enthusiastic but simultaneously they are immature. As a mentor, my role is to groom their technical and interpersonal skills and that was what they needed perhaps.

In the NASA HERC project, the cost of rover making, shipment and participation was approximately `12.0 Lakhs and we are very lucky that our college funded fully.

I would like to mention that our college funds innovative student projects along with promoting students for different co-curricular activities.

The SAE KIET Workshop has a very well equipped central workshop where students work 24x7x365 (day and night) to convert their designs into reality.

Starting from basic machining facilities, the SAE workshop is furnished with high end Dual Feeder SS & AL welding facility along with high end VMC and CNC machines, for designing as well the CAD/CAM lab is very well primed with latest version of modeling and analysis software.

“It is a great honor for us and showcases our dedication to innovative engineering. Our students have been working hard for the past six months and their commitment has paid off. The best part is that this is the first time we have participated in the competition and were pitted against teams who had been competing for the past 20 years.” said Tuhin Srivastava, Mentor 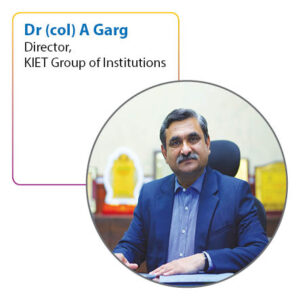 Dr. (Col) A Garg, Direc tor, KIET Group of Institutions said, “TEAM MOON BUGGY” from KIET Group of Institutions is now a torchbearer not only for our Institute but also for all TIER II Institutes across the country. While it is expected that IITs and NITs can only contribute to major innovation, here is an example where a student team that too led by a girl leader from TIER II Institute has won the appreciation from none another than Hon’ble President of India for an innovative design. I am confident that similar contribution will continue by this team of students in future too.  In my opinion, higher innovation index is a sign of a developed country and such activities by students across the country shall lead to improvement in “Global Innovation index of India” in a gradual manner in few years to come.”

Defence Research & Development Organization (DRDO) has opened the recruitment application for apprentices at the Defence Laboratory, for 2022-2023. A...