India is becoming a strategic partner for many countries in the field of startup ecosystem. Businesses in agriculture and supply chain are making a mark by using technologies like IOT and AI, creating a simpler and sustainable solutions.

A report by Accenture estimates the digital agriculture services market will hit $4.55 Billion by 2020 globally, thus, pointing out to the fact that agri-tech startups in the world, as well as India, are bound to grow.

The agricultural products value marketed during 2004-05 was ` 5053 billion, which included ` 3323 billion of crop products, ` 1387 billion of livestock products and ` 343 billion of fisheries products. Similarly, agro-processed products were
` 4169 billion. The compound annual growth rate of expenditure has been 4.2% over the years.

A report by Accenture estimates the digital agriculture services market will hit $4.55 Billion by 2020

Agriculture, forestry, logging and fishing accounted for 16.6% of the GDP in 2007.

Agri-business is a constantly growing market and expanding from the Stone Age to the era of big data.

Many reports suggest that the market valuation can be increased through higher investment in supply and marketing chain. Experts from all sectors of the agriculture industry suggest that millions and tonnes of food products can be added to the food chain if we invest highly in post-harvest losses due to insects, rodents and weather damage.

Due to lack of proper handling (cleaning, sorting, grading and packaging) at the farm gate or village level, about 7 per cent of grains, 30 per cent of fruits and vegetables, and 10 per cent of seed spices are lost before reaching the market. An estimated ` 50,000 crore is lost annually in the marketing chain due to poorly developed marketing infrastructure and inefficient system of marketing activities.

FM announced increases in customs duties on certain items to incentivize domestic value addition and the “Make in India” campaign for key sectors. Consequently, the import duty on vegetable oils, various juices and other processed food products were raised. The exception to import tariff increases was for raw cashews, which received an import tariff reduction to support the cashew processing industry.

A country which was self-sufficient in food had to import nearly 7.5 million tonnes of wheat during 2006 and 2007. Changes can be brought down by putting more stress in the value chain, finance, policy, training, and market linkage methodologies to improve availability and affordability of inputs, agriculture production, post-harvest handling, output markets and price discovery information, and exports, with improvements to farmer and other stakeholder capabilities to generate higher volumes and efficiencies that increase household incomes.

India is becoming an example of ease of doing business for many countries. Government of India has introduced its first ever Agricultural Export Policy to boost the exports of agricultural products to USD 60 billion by 2022 as per press release by Department for Promotion of Industry and Internal Trade (DPIIT).

Some major investments and developments in agriculture are as follows: 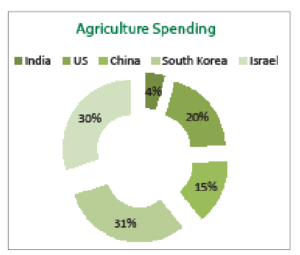 Political policies affect directly to the agriculture industry where 70 % of the population demand on it. 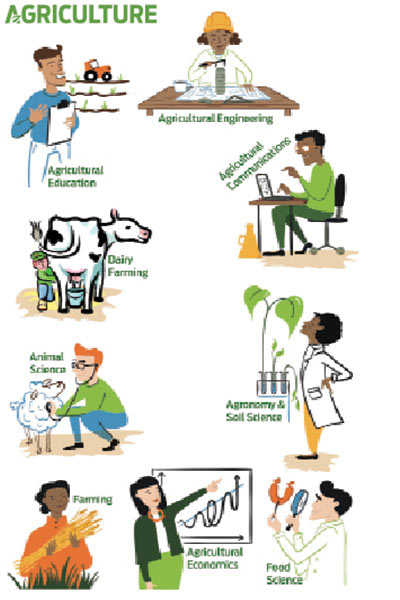 The removal of Articles 370 and 35A of the Constitution within 10 weeks of the new government has come as...