Education Should Reach Everyone

Dr. Anirban Das, who is a Professor of Computer Science & Engineering, speaks to Higher Education Plus regarding his work in increasing the Gross Enrolment Ratio of West Bengal

This number is achieved not because of government support or schemes like mid-day meals but the personal connection and interaction between families regarding education; for which I became a helping hand.

In 2008, when Prathibha Patil was the President of India, she invited me for a personal discussion regarding the methods to improve the GER in West Bengal and the country as a whole.

I have been working with the young minds in the backward communities of West Bengal and became able to churn out many innovators from them. As of now, around 75 patent applications got registered by us.

In 2021, one of our projects was recognised by the late Chief of Defence Staff, Bipin Rawat. Our most recent project is a machine that can detect the chances of Brain Cancer by analysing hair follicles. We will be looking to commercialise our projects once we receive the patent confirmation.

West Bengal has more tribal people compared to other states in India. The Gross Enrolment ratio among them was considerably low. They were very much underprivileged that they hardly made anything for their livelihood. Even the thought of three square meals per day was a luxury for them.

Sending their children for education was the only means to empower them. When I started in 2005, I visited almost 10,000 houses within a short period to help families send their children to school. I began my work in the districts of Medinipur, Purulia, and Bankuna along the banks of river Subaruarekha.

Later on, I expanded my work to other areas of West Bengal. Fortunately, the work has become fruitful. The literacy rate and the Gross Enrolment Ratio are now growing. 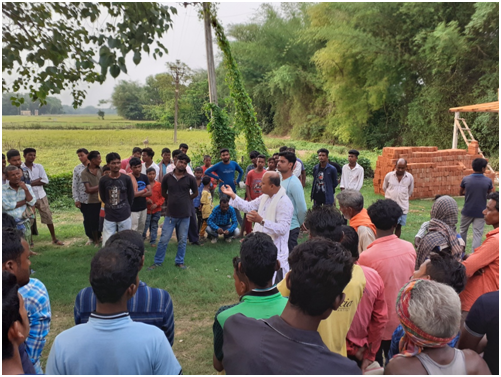 Initially, positive responses were not there. I was doing my post-graduation during that time, and therefore, my opinions were not valued by the people. I had to visit the local markets to convince the people, including the shopkeepers the benefits of education.

Currently, many families are seeking my suggestions regarding education, and I’m happy about the same. My work has reached every nook and corner of West Bengal.

What I am doing is nothing new, but my aim has always been helping underprivileged people, especially those from the remotest areas of the state, achieve education. As a result, the GER among the backward communities of West Bengal is rising every year.

Even though I could persuade many people to get educated, there are still many people who are not convinced. I want to spread the stories of people who have got educated and become innovators due to my efforts. This will make the unconvinced people seek the light of education.

I’m planning to help the people who are ready for innovations so that they can benefit society. Also, India is becoming a superpower, but if the youth in India are not educated or skilled, it can halt growth. So, making people realise the importance of education is my primary plan.

How EdTech is empowering different sections of society?

GITAM welcomes three distinguished academicians to its Board of Management

Admission for Delhi nursery admissions 2023, to start from December 1.