Screenwriting invites the audience into the world of films, said veteran screenwriter…

“Screenwriting invites the audience into the world of films”, said veteran screenwriter, Anjum Rajabali at the 5-Day Annual Screenwriting Workshop

Whistling Woods International (WWI) hosted the 2022 edition of its 5-day Annual Screenwriting Workshop in association with Screenwriters Association (SWA). The workshop witnessed the participation of over 200+ aspiring and existing writers. The coveted, hands-on workshop led by Anjum Rajabali, renowned screenwriter and Head of Department (HOD) – Screenwriting at WWI School of Filmmaking, along with guest speakers from the Indian film fraternity, was delivered in a hybrid mode this year to encourage pan-India participation.

The workshop kickstarted with an introduction to the elements of screenwriting. Explaining the process, Anjum Rajabali said, “Through screenwriting, viewers or audiences are invited to the world of films. Character is the factor that breathes life into the plot and the plot is the factor that gives a framework to the character. Both plot and the character can’t exist without each other. When you are talking or thinking about the character it needs to be in the context of the plot.” As the day progressed, Juhi Chaturvedi (Vicky Donor, Piku, October, Gulabo Sitabo) was the first amongst the critically-acclaimed speakers to interact with the participants.

Day two ushered in more complex discussions on screenplay structure, character choice, psychology, and psychological defence mechanism. On character development, Anjum Rajabali said, “Films are powered by how the characters are feeling. The writer builds the empathy of the audience towards the character.”

On the third day, the workshop focused on mythology, its impact on the script, its presentation and also examined the relevance of storytelling in screenwriting through a study of ‘The Hero’s Journey’. Following this, Sandeep Shrivastava (screenwriter – New York, Shershaah, and the web series, Aarya) interacted with the participants. Answering a question regarding the involvement of screenwriters during production, he said, “You as a writer are very connected to the material that you have created, and you can’t separate yourself when the movie goes on the floor. I was there on the set when we were shooting the movie, Shershaah, and when the war sequence was being shot, I was still writing in between the shoot. It is just like when a mother sends a child to school – she always wants to know what’s happening.” Chaitanya Chinchlikar, Vice President and Chief Technology Officer, WWI rounded up day three’ discussions with a session on the future of writing for the metaverse and gaming.

Scenes from key movies were screened to showcase the importance of scene design and dialogues to the participants on the fourth day. Film critic and screenwriter, Aniruddha Guha also brought his multidimensional expertise to the workshop. Talking about his two passions – cinema and writing – he advised the participants to enjoy the screenwriting process while working on scripts.

On the last day of the workshop, Anjum Rajabali walked the participants through a wide array of topics such as Natyashastra, Navrasa, and legalities like copyright protection, credits, contract signing, and compensation. Workshop participants were given a chance to pitch their stories to Guneet Dogra (Producer) in a practical session.

Raj Nidimoru, part of the popular writer-director-producer duo, Raj & DK, behind the hit series, The Family Man, was the penultimate speaker of the workshop. He said, “You are in a time where you can write whatever you want as you don’t have any rules. Don’t write only one script, write two to three.  Keep writing, as writing is not the hard part. The idea is the hard part, writing is just a discipline.”

Subhash Ghai, Founder & Chairman, WWI concluded the workshop on an inspiring note. In his closing remarks he said, “Whatever you have been experiencing from your childhood, just recall it and write it, as it comes from your heart. You should be interested in people and if you are interested in people, you will write for the people.” The workshop was well-received by all attendees who wrapped up the sessions with a standing ovation for their workshop instructor, Anjum Rajabali.

Image 3- Sandeep Shrivastava shares his experience of Shersha with the students.

Image 4 Anirudh Guha inspires the students to follow their passion for cinema and writing.

Image 5- Guneet Dogra shedding light on the students on how to pitch their stories.

Image 7- Subhash Ghai concludes the workshop with his closing note 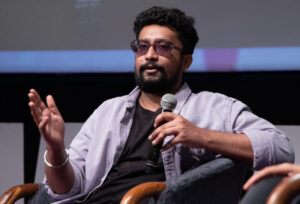