From his early days to captainship of the Indian hockey team, Viren Rasquinha opened up on multiple topics during the recent ’Changemakers’ session at GITAM

New Delhi, August 26, 2022: In an exciting conversation on sports and life, Viren Rasquinha, the former Indian Hockey Team Captain, interacted with the students of GITAM (Deemed to be University) Hyderabad campus, as a part of the varsity’s popular ‘Changemakers’ series. A recipient of the 2005 Arjuna Award for Best Sportsman of the Year in Hockey, Rasquinha said that sport is an excellent instrument to teach values such as team building, equality, discipline, inclusion, perseverance, respect and fairness to all. The session was moderated by Smita Sharma, a journalist and visiting faculty, Kautilya School of Public Policy.

Talking about his growing up days in the bylanes of Mumbai, the cricket and hockey grounds in his school and being coached by an Olympian early on, Rasquinha referred to the victory of Leander Paes at the 1996 Atlanta Olympics as an impressionable point in his life. “I was just a teenager. It was my moment of inspiration and from then on, I wanted to play for India and captain the Indian hockey team and play at the Olympics. I am lucky I went on to do all these things.”

Rasquinha was a member of the team that competed at the 2004 Athens Olympics. He quit international hockey in 2008 to pursue management studies at the age of 28. He is now the MD and CEO of the Olympic Gold Quest. 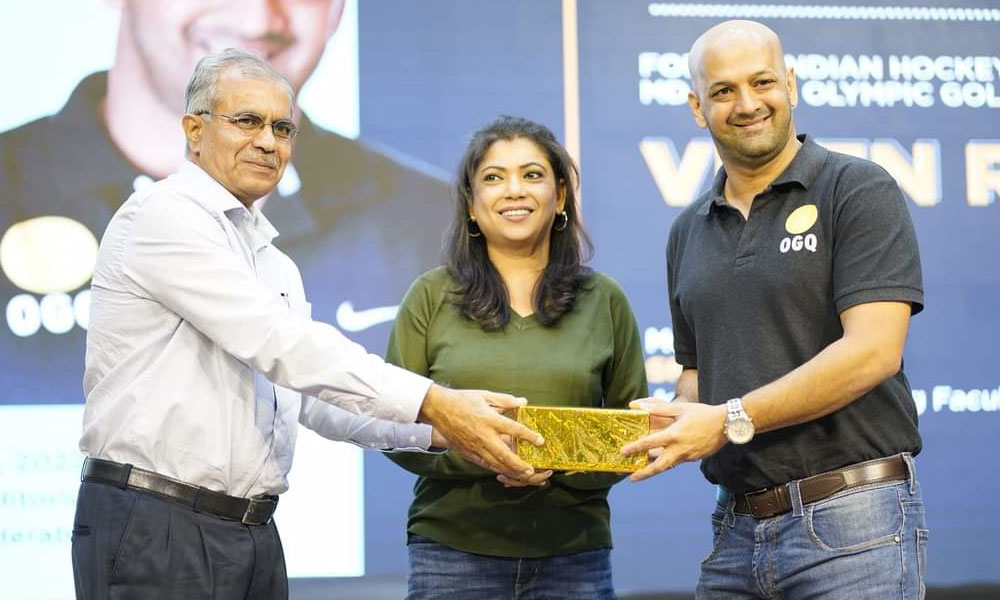 “In sport, you lose more than you win. That’s the toughest part. Sport’s biggest learning for me is to be able to come back from that defeat. The learning from defeat is far greater than the learning from victory,” said the sportsperson, while iterating his mantra: “Be the best and not the second best. If you are the second best, you still have to keep pushing the bar”.

He added, “While playing in a team, everyone has their own role to play, with different skill sets. A leader should be able to identify the skill set and should bring out the best in each teammate.”

Speaking on dejection, he further added, “In life, many people will tell us that you can’t do this. I believe if you put your heart, your soul your mind to it, give everything you have I think you can do whatever you want in life.”

Rasquinha also spoke about time management and how he managed his time effectively for continuing his studies and sports simultaneously. He added that facilities in sports have improved and coaches are available in India, if someone wants to truly work with the right intentions, they could succeed. He expressed his disappointment about how most Indian universities treat sports as an extra-curricular activity but not as the main focus. The award-winning hockey player also spoke about the urgent need to upgrade the skill set of coaches at the gross root level.

Advising students to stay active through daily walks and stretches, he said, “Pursue the passion you want and develop the culture of sport for a healthy nation”.