New Delhi, December 08, 2022: Four students of Augustana University, South Dakota, US, out of which two are Indians, were named grand winners of the fifth annual ‘Call for Code Global Challenge’.

The winners were announced, recently, by Call for Code founding partner IBM, creator David Clark Cause, charitable partner United Nations Human Rights, and programme affiliate, the Linux Foundation. IBM’s support for Call for Code is aimed to give businesses the tools they need to create effective sustainability solutions.

“Responding to the need for impactful sustainability actions, today, and in future, the event invited innovators worldwide to help accelerate sustainability and combat climate change with open source-powered technology. The announcement of Augustana students as final winners establishes the importance of technology in tackling foreseeable climate crises, mentor’s support, and liberal arts education in building critical skills while contributing to projects that have potential to help our planet”, said Ben Iverson, Director of International Programmes & Enrolment, Augustana University, South Dakota, US. 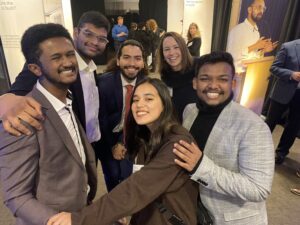 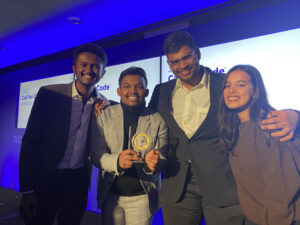 The app developed by four students of Augustana University, students called as ‘GardenMate’ targets the problem of food waste with a marketplace for excess produce, as well as an educational platform for sustainable garden practices.

This past summer, Abemelech Mesfin Belachew of Ethiopia joined three of his AU peers, Deepak Krishnaa Govindarajan ‘25 and Prana Mohanty ‘25, of India, and Manusmriti Budhathoki ‘24, of Nepal, to brainstorm a solution for the challenge.

Majoring in multiple fields, such as business administration, computer science & software engineering, data science, economics, finance and mathematics, the students brought a variety of different skills and perspectives to the table. They also leaned on Augustana Call for Code Faculty Representative Dr. Matthew Willard, who helped them land on the idea for GardenMate.

The group recognised the importance of Call for Code’s mission. “If we can all come together as a society, we can definitely solve this generation’s issues, like global warming,” Govindarajan said. Further he added, “I feel like Call for Code is making that happen. All the participants, not just the finalists, did something to help sustainability, and that’s what matters.”

“This is the fifth Call for Code Global Challenge and second consecutive year that an Augustana team has made it to a final round, last year, Onajite Taire ‘22 and Gedion Alemayehu ‘22 were a part of a team that was named a global finalist for the 2021 Call for Code University Challenge”, said Iverson.

According to Mohanty, solving such big problems seems attainable, but we just need to focus on what our team can do about it and do our best. Adding further she said, “And, when everybody does their best, the only outcome that we can see is success. But let’s say that we did not succeed that does not mean we stopped. We are still motivated, so we just keep going until we succeed.”

GardenMate will receive $200,000 USD in addition to help from the Linux Foundation to open source their application and assistance from IBM Ecosystem Partners to deploy their solution.

About Call for Code Global Challenge

The way people live and interact with virtually everyone and everything has been transformed by developers. Developers perceive opportunities where other people see obstacles. As a result, Call for Code was developed by David Clark, the CEO of David Clark Cause, and introduced in 2018 along with founding partner IBM and international partner United Nations Human Rights.

Artium Academy’s new Western Vocals Course will help you find your voice and sing like your fav artist!

This performance-based curriculum, designed and certified by the legendary, Padma Shri Sonu Nigam, is for both, aspiring and trained singers...

Private Universities in Karnataka Protest against the Use of ChatGPT