Giving a call to our preserve and propagate Indian philosophy, values, culture and heritage, the
former Vice President of India paid his tribute to Koneru Ram Krishna Rao – a career academic and visionary Gandhian

The institution also announced that the family of Dr Rao has committed a donation of Rs 4.5 crores to GITAM

Fondly recalling his association with Koneru Ram Krishna Rao from his student days at Andhra University, the Hon’ble former Vice President of India Venkaiah Naidu said, “India is on the move, undoubtedly. Once upon a time, India was known as the Vishwa-guru. Students from across the globe used to come and study at universities here. (After) the advent of colonial rule, we lost our moorings and greatness. Even today, if India wants to be the leader, we want to spread the message of love and peace. ‘Share and care is the core of Indian philosophy. Some people are not able to digest the emergence of India on the international scene. India is being heard, respected, and revered.”

He added, “Mere comforts in life will not make us happy. This is where our philosophy, Gandhian values, culture, and heritage come in. We must preserve, revisit, and propagate our culture — and this is what Ramakrishna Garu believed in. That’s the real tribute we can pay to him.” 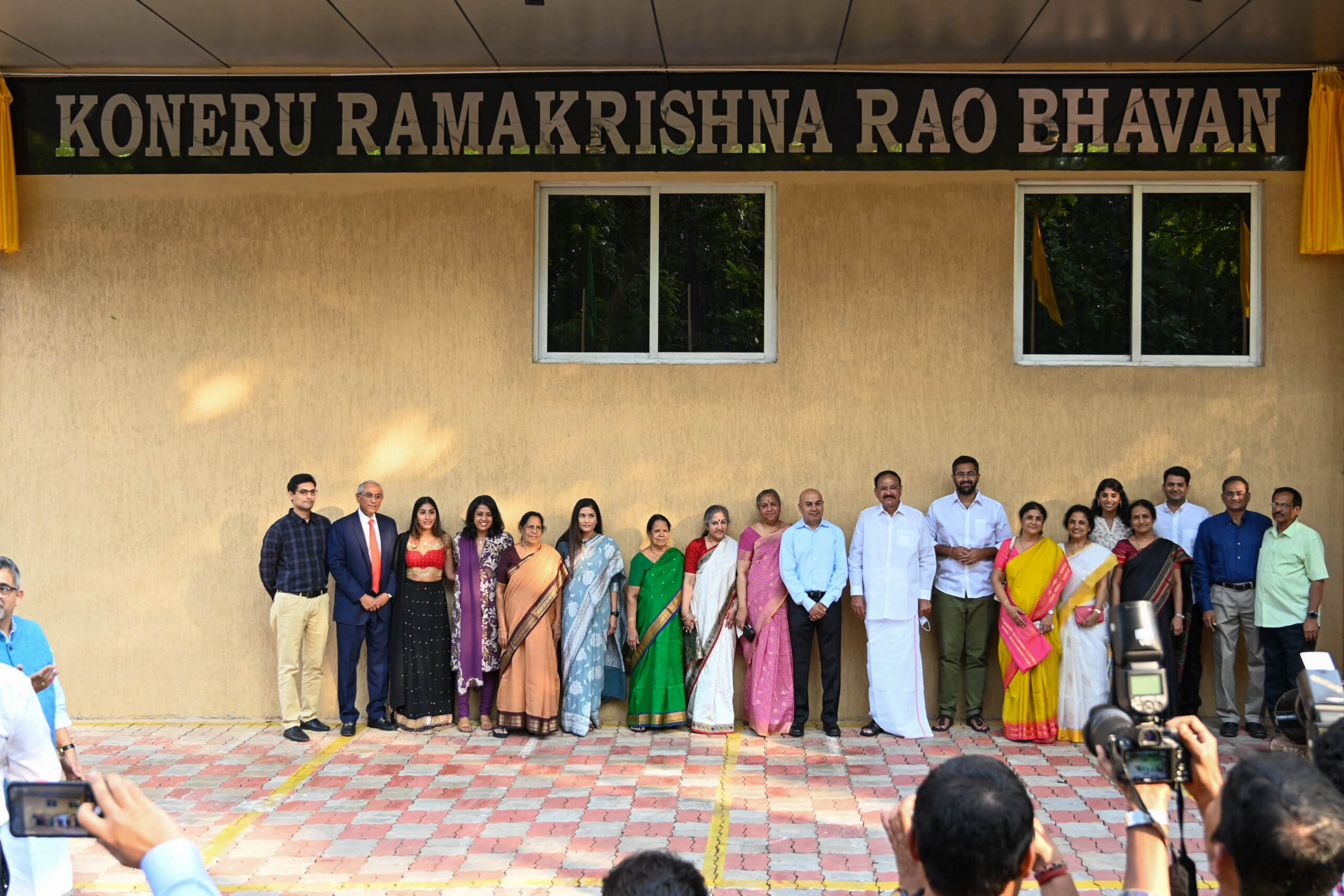 The GITAM School of Humanities and Social Science, which began its momentous journey as the Centre for Gandhian Studies in 2010, was the fruition of the long-cherished dream of Mr Rao. The building housing the GSHS was renamed ‘Koneru Ramakrishna Rao Bhavan’ in recognition of his contributions and the generous donation of about Rs 4.5 crores to GITAM.

The committed amount will be used to conduct training programs/workshops for students and teachers; support various research projects in pursuit of new and innovative ideas that benefit the society at large and promote rural literacy; provide scholarships to meritorious and needy students to help them achieve their knowledge fulfilment goals; promote programs for citizen participation in community development, and empowerment of women, and to engage counsellors for providing counselling to the needy for their psychological health and economic well-being.

Speaking on the occasion, Mathukumilli Sri Bharat, President, GITAM (Deemed to be University), said, “Koneru Ramakrishna Rao’s commitment to Gandhian values was one of the strong bonding factors between him and my tata (grandfather) Dr M. V. V. S. Murthi. After my grandfather passed away, the magnanimity and confidence coming from Dr Rao gave me a lot of strength.” Referring to the donation of close to Rs 4.5 crores by Dr Rao’s family to GITAM, he said, “Since we have founded in 1980, this is the largest donation outside of the founders, that has been made to GITAM. This is a significant donation to an existing institution.”

Mr Sarath Chandra Rao Koneru, son of Koneru Ramakrishna Rao, said, “Over the years, my father was approached countless times for service in government or at a variety of academic institutions. He was very selective in what he chose to participate in. He accepted the Chancellor position at GITAM, and he really came to relish and love this institution. In the years and decades to follow, as people walk by this building or walk into this building, it really is my hope that they appreciate the man whose name is on the building not only for his accomplishments as a scholar and a leader but that they also appreciate him for his character.”

The Department of Humanities and Social Sciences at GITAM offers a pioneering five-core undergraduate programme aligned to the Civil Services and a Master’s Programme in Economics. Faculty from diverse areas such as Psychology, Gandhian Studies, History, Geography, Sociology, Philosophy, Economics and Political Science and International Relations staff the Department. The Department brings contemporary relevance to Gandhian ideology through its diverse courses and offers value-based education support to the varsity.

Pune, November 25, 2022: In recent years, many projects have been initiated to uplift rural India.Especially projects aimed at improving...

Admission for Delhi nursery admissions 2023, to start from December 1.