New Delhi, December 31, 2019: In the tenth year of its existence, the Right of Children to Free and Compulsory Education Act (RTE), 2009, has seen impressive growth of 19% increase by year over year in admission since 2015-16. This finding by Indus Action in its annual report The Bright Spots 2019 throws a very different landscape of education in the country.

There are growing awareness and demand within Indian society, to have not just access to education, but to also have access to high-quality education. The rationale behind the inclusion of this Section in the RTE Act was that inequitable and disparate schooling reinforces existing economic and social hierarchies and promotes an indifference towards the plight of others in society. Despite the slow start, the RTE act finally witnessed an important landmark impact of yearly increase in children admitted under Section 12(1)(c).

Commenting on this report and findings, Tarun Cherukuri, Chief Executive Officer of Indus Action, said, “It is too early to announce or triumph for RTE implementation but every single body working on it deserves to keep some credit for 19% ascend in new school admissions since 2015-16. For Indus Action there has been no looking back since 2009, but now when positive outcomes are actually visible we are motivated and determined to enrol one million children in mainstream schools by 2020.”

According to the report, over 40 lakh children are admitted under section 12 (1) (c) RTE Act of which 68% of children are from Madhya Pradesh, Rajasthan, Karnataka and Tamil Nadu. The report further mentions that more than 1.5 lakh students got enrolled under RTE in Delhi till 2018-19 and that 69.65% schools participated in Delhi under RTE. The report also highlights that only 17 states and Union Territories are admitting children as per the Annual Work Plan and Budget of the States and Union Territories (AWP&B 2019-20).

The RTE Act is enabling parents from disadvantaged backgrounds to choose school irrespective of what economic or social background they come from will lead to more kids moving towards private schools. This shift can be witnessed in a few states in the country. Due to this migration to private school, the public schools too are on the pressure to enrol more students by improving outcomes to give proper choice to keep alive the choice of parents. 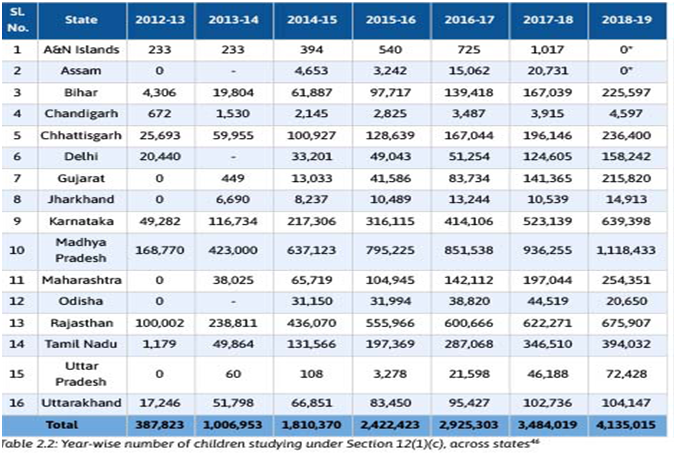 Nelson Mandela has wisely said that education is the most powerful weapon which can be used to change the world. Indus Action Initiatives firmly believe in this wonderful thought and therefore, is working in sync with Right of Children to Free and Compulsory Education Act, 2009.

According to the education ministry, President Droupadi Murmu has approved the appointment of new directors to eight Indian Institutes of...